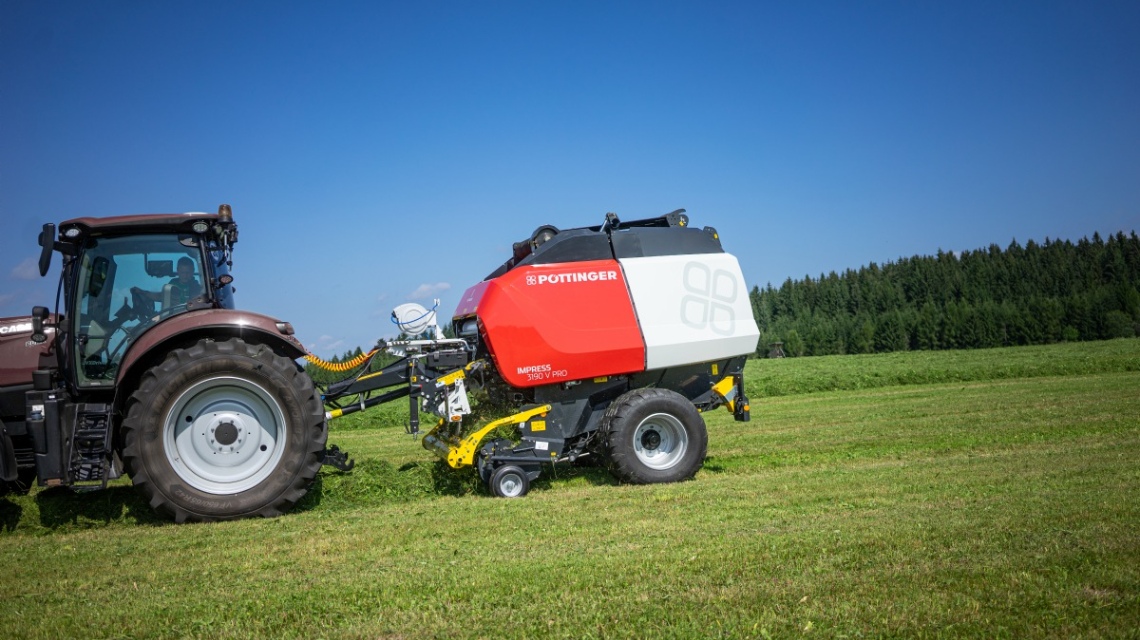 Extensive facelift to the first generation of round balers

Five years ago, the Austrian agricultural machinery manufacturer PÖTTINGER successfully launched its IMPRESS round baler, which was developed entirely in-house. How to make good things even better: the IMPRESS has undergone a facelift and now appears in a fresh design with a new name and even more intelligent details. The new machines will be available from October 2021.

Focus on user-friendliness and reliability

The new look reveals a number of improvements, as well as the introduction of a selection of new equipment options. Proven components such as the floating pick-up, the LIFTUP rotor and the chopping system with up to 32 knives have not been changed. Nevertheless, by increasing the baling pressure by 20 percent, the IMPRESS V models now produce bales that are even firmer and heavier than before. The range of options has been expanded to meet the demands of large farms and contractors and underlines the professional level of these machines. The basic range still includes two fixed-chamber IMPRESS 3130 F MASTER and IMPRESS 3130 F PRO balers, as well as three models each for the variable-chamber balers. The IMPRESS 3160 and IMPRESS 3190 are available in the V version without a chopping system, V MASTER with a 16-knife chopping system and straightforward control concept, and in the V PRO version with a 32-knife chopping system, load sensing, ISOBUS control and numerous automatic functions. The product range is rounded off with three baler & wrapper combinations: IMPRESS 3130 FC PRO fixed-chamber with a bale diameter of 1.3 metres, IMPRESS 3160 VC PRO variable chamber up to 1.55 metres and IMPRESS 3190 VC PRO variable chamber up to 1.85 metres. Bales with a diameter of up to 1.5 metres can be wrapped.

A central element is the completely new binding unit. The feed and tension of the binding material is now regulated from outside the baling chamber, not by the core of the bale. This means that rolls of material can be be used regardless of the condition of the core. The maximum width of the binding material is 1,400 mm. The baler can be equipped for film & film binding using a tail binding unit. The roller is no longer braked electrically, but hydraulically. The settings for net and foil are saved separately. If frequent changes are made between net and film, a second binding roll holder can be ordered. There is then no need to remove the heavy roll and only the new material needs to be threaded in. An optional loading system now supports the operator when changing the roll. The new binding unit is installed on all models. On PRO models, solo or with wrapper, as well as variable or fixed chamber, it can be upgraded to film & film binding.

An optional LED lighting package for all PRO models ensures optimum illumination of areas such as the pick-up and bale ejector and wrapper platform. LED strips with switches are installed under the side panels for maintenance work and changing rolls of film etc. The machine can now be cleaned quickly using compressed air using an optional hose reel with air supplied from the air brake system through an overflow valve. Moisture sensors can be fitted to conveniently assess at the control terminal the storability of the crop. The new IMPRESS PRO generation also sees the introduction of the new POWER CONTROL 3.0 terminal. This enables the direct selection of functions using membrane keys and the input of parameters using the 5" touch monitor. The monitoring system can be supplemented by an optional camera system. A separate 10" LCD screen can display up to four camera images at once.

Updates also for the wrapper combinations

In addition to baler changes, improvements have also been made to the wrappers: The pre-stretch unit and the holding and cutting device have been revised, for example. The wrapper platform can now rotate the bale before and after the wrapping process to reliably tidy up the ends of the binding and wrapping layers. This prevents loose ends of film from snagging during transport or storage. In addition, excess air is pressed out between the layers, which has a positive effect on the silage quality. The film magazines now hold 2 x 8 rolls of wrapping film or 2 x 6 rolls of wrapping film and 2 x 1 roll of binding film. Together with the two spare roll holders for net or binding film at the front of the baler, there is enough material on board for long days in the field. There are also more tyre options with widths of 620 mm and 710 mm available for markets that permit transport widths of over 3 metres.

The changes that affect product maintenance mainly concern optimisation of bearing points, chain runs and greasing. The rotor is now fitted with a freewheel to ensure smooth coasting in all conditions. Maintenance status is now monitored by a service counter, which informs the operator about upcoming greasing intervals. To round off, a 1000 rpm driveline is now also available as an option for V and MASTER models. 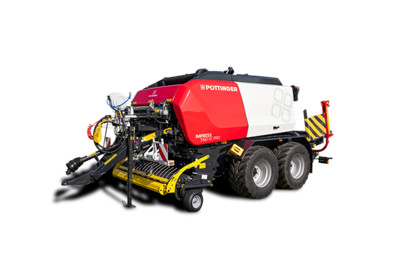 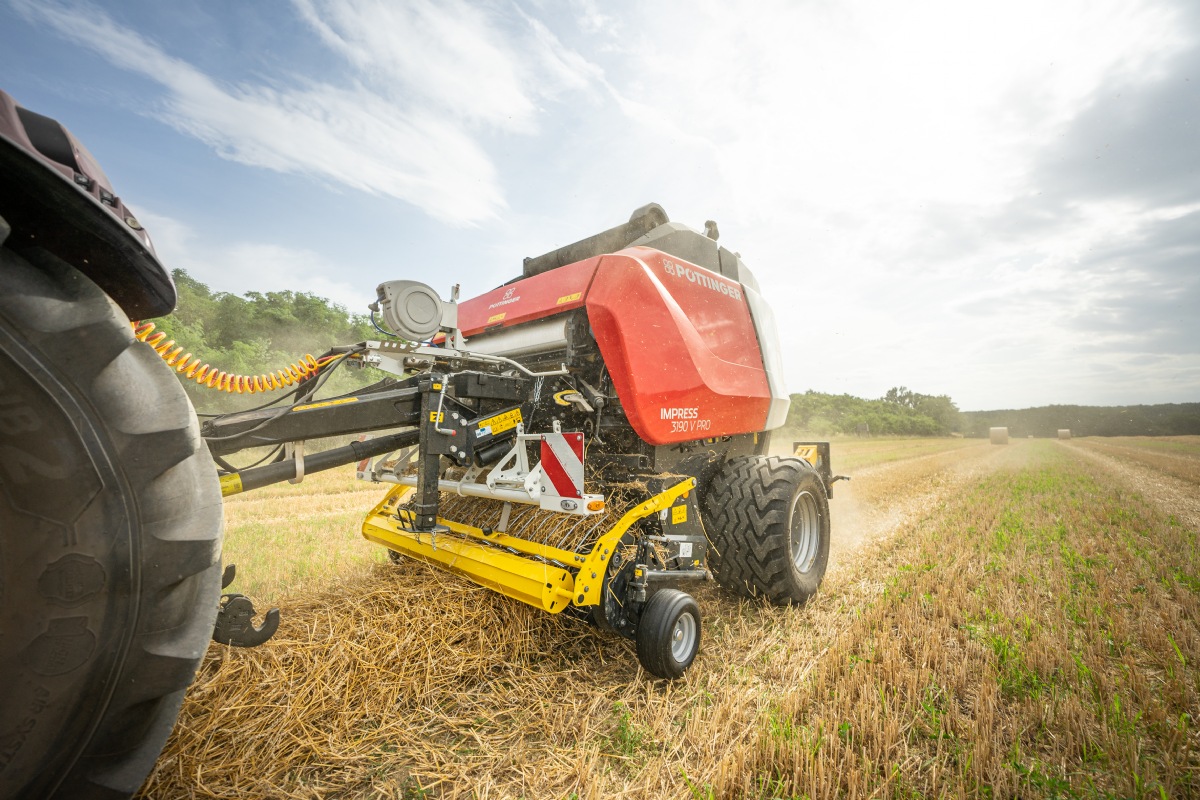 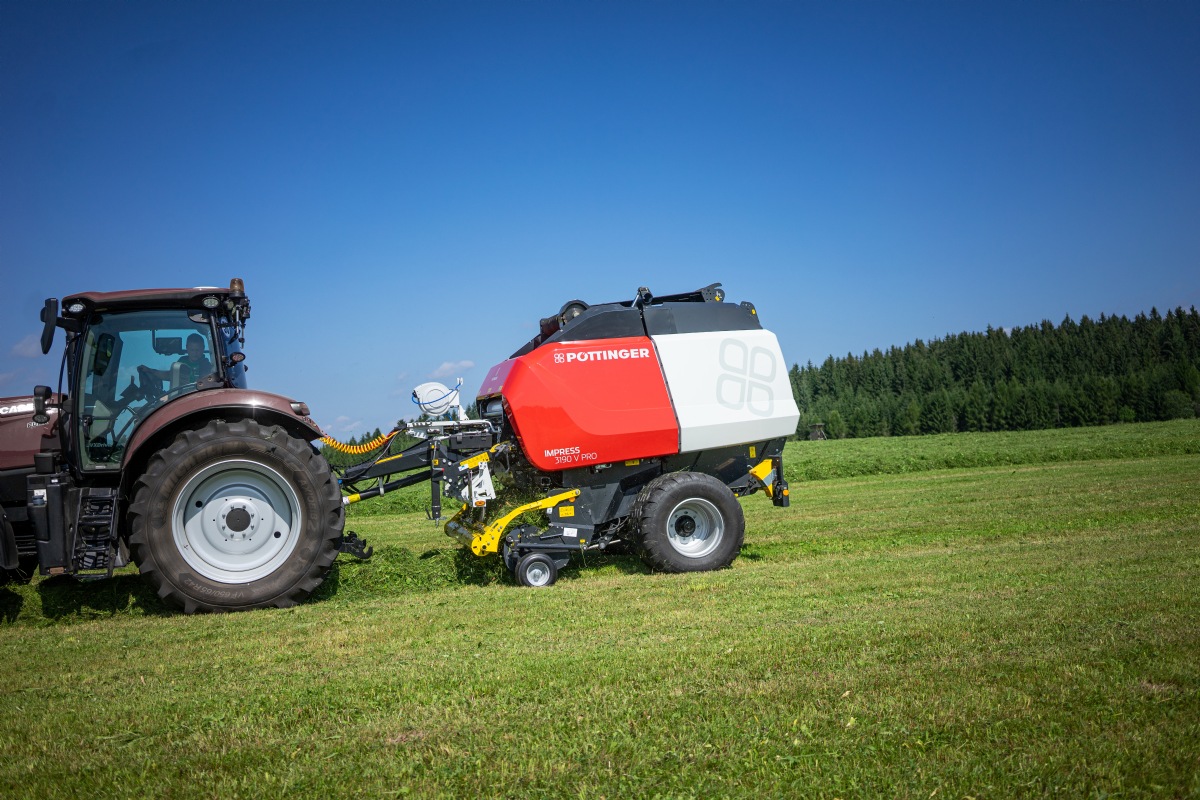 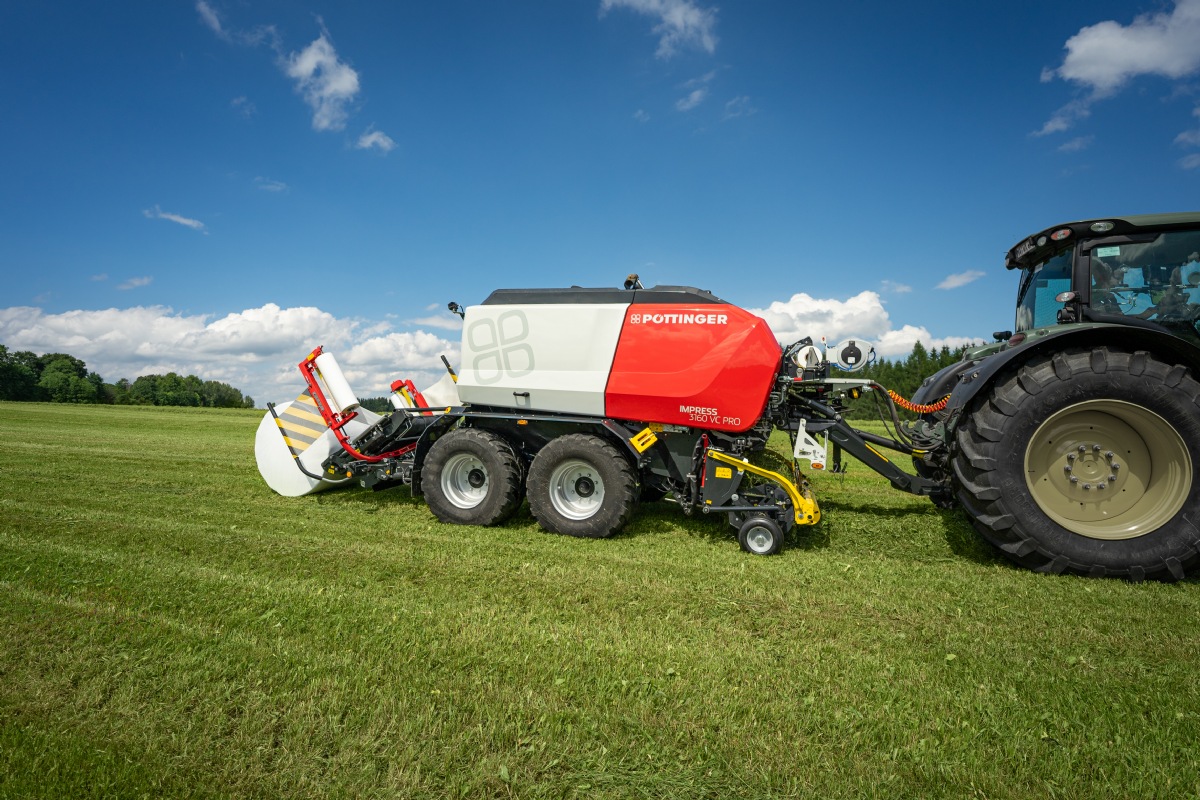 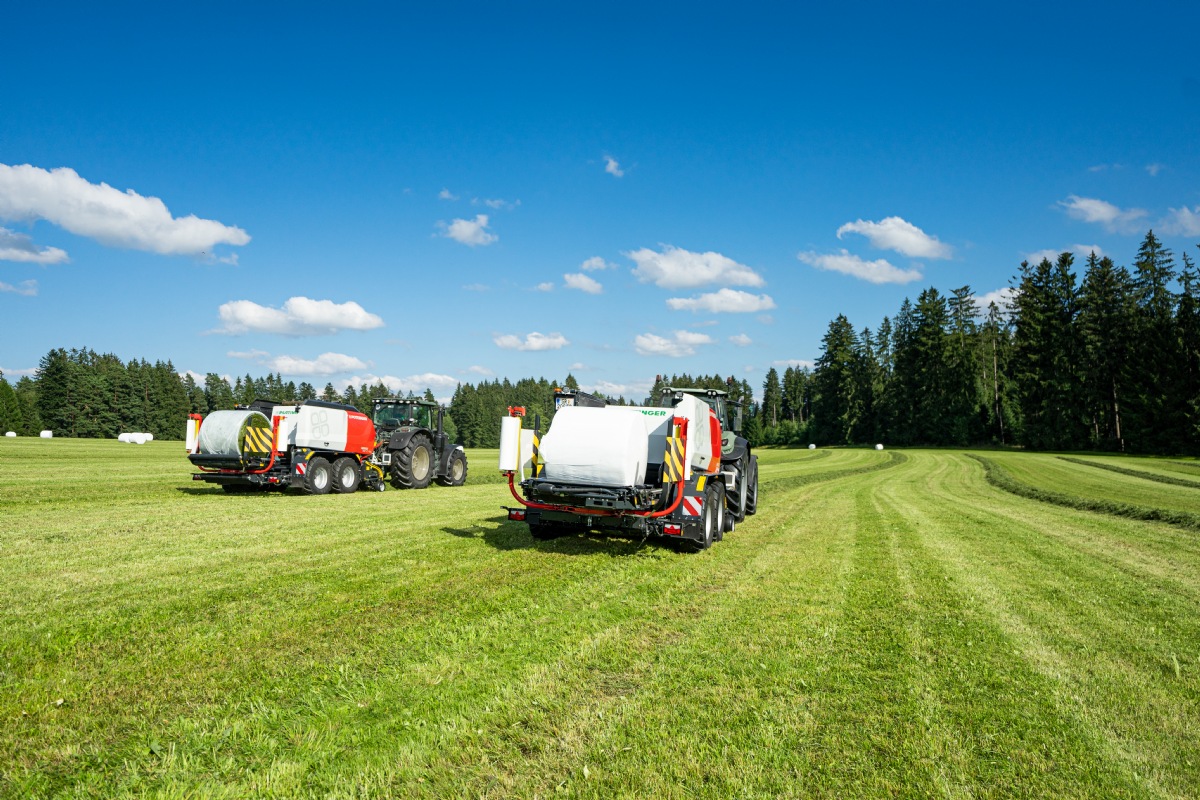 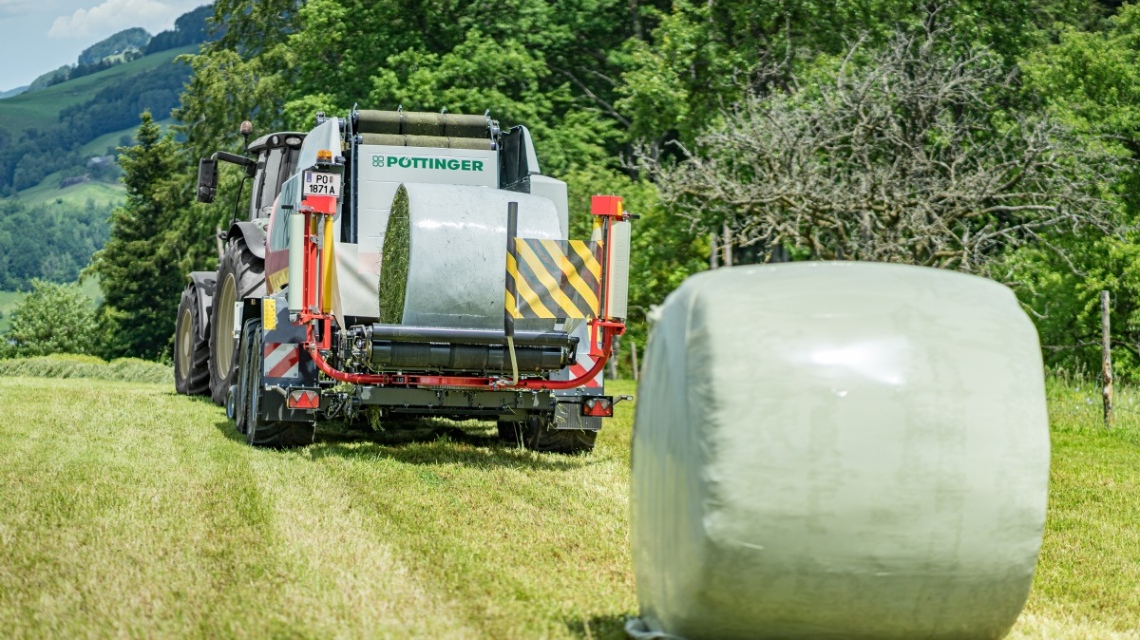 Baling, binding and wrapping in one pass 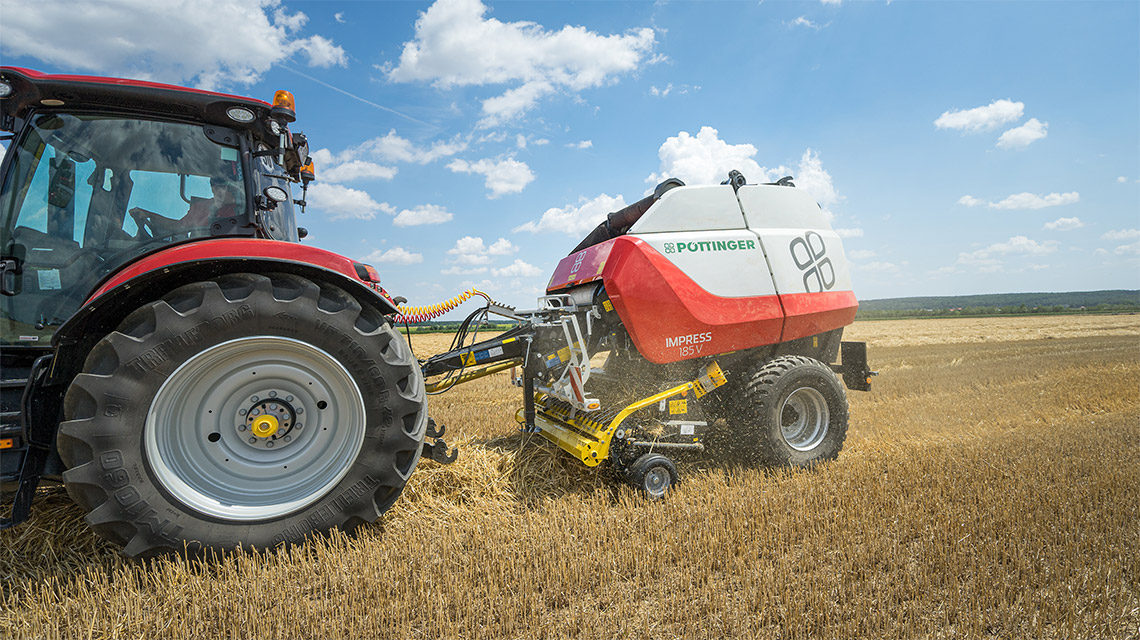 Round balers with new features for the best forage 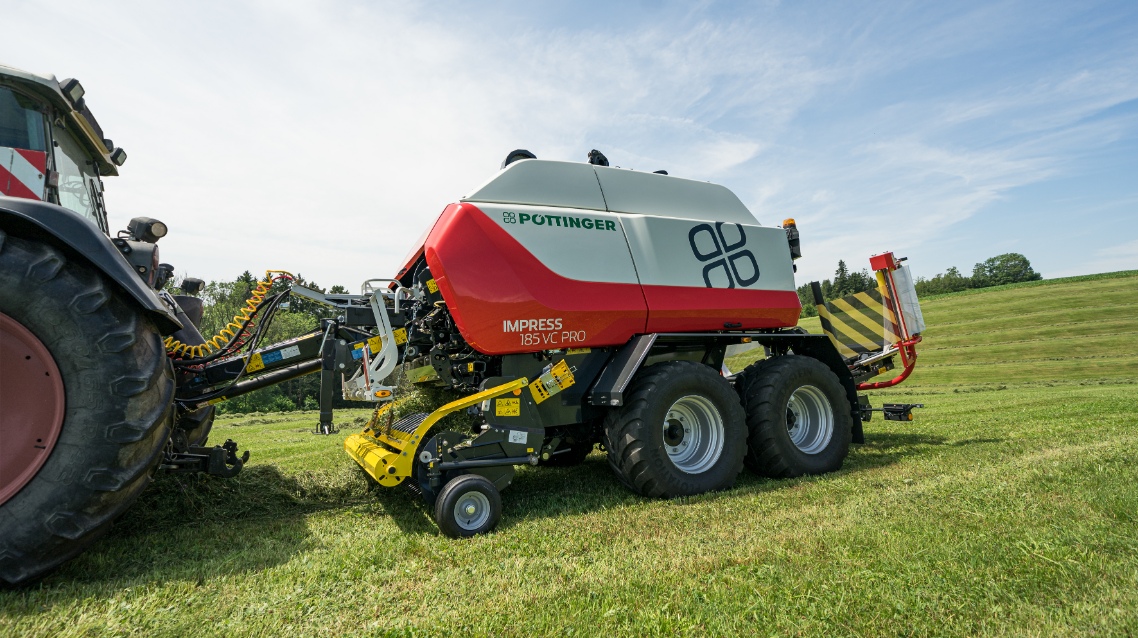